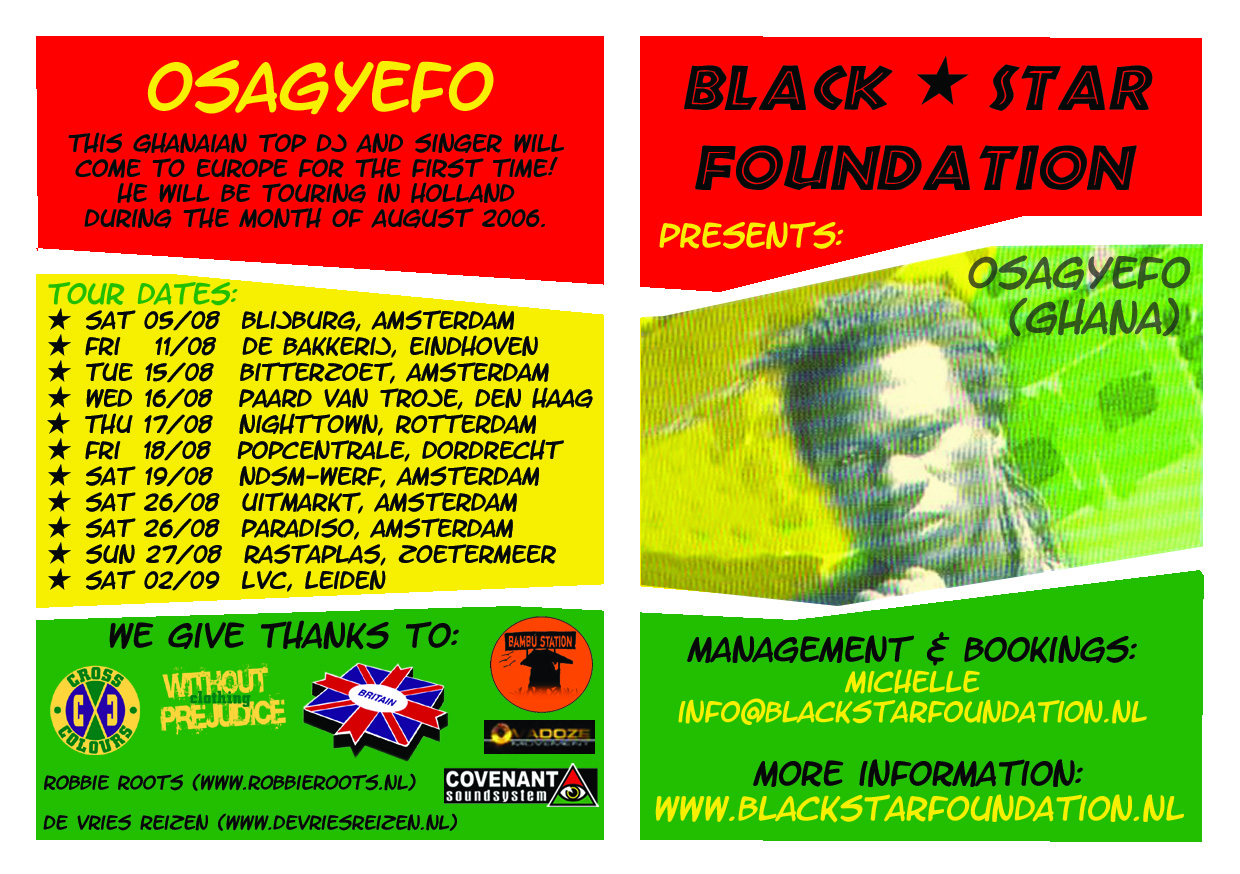 From the beginning of August till the beginning of September 2006, the Ghanaian singer Osagyefo came to Europe for the first time! Black Star Foundation invited him for shows, studio recordings and rehearsals with musicians from here.

His real name is Dennis Afram and he was born and raised in Kumasi, capital city of the Ashanti region in Ghana. His artist name is 'Osagyefo' (say: 'O-Sa-Djee-Fo'), meaning liberator.

He left his parents after finishing high school at the age 19 to the city of Accra (Ghana's capital city). He started his career with the name Ragga, which he got from his friends. In 1995 he formed the band Militant Youth with a DJ named Jah Youth, who is now in France. The band has been one of the toppest band during rasta festivities in Ghana. Osagyefo worked with some top bands like The Sons of Zion, The Zion Children and currently with the All Star Crew.

In 2005, Osagyefo recorded two songs for Black Star Foundation, 'Blaze Fire' and 'Can't take it' and they are both wicked tunes!

During his first stay outside of Ghana, Black Star Foundation introduced Osagyefo to different musicians and producers in Holland and we recorded more than 14 songs in 7 studio days. There was a very spontaneous collaboration with Tuff Lion, producer and multi-instrumentalist from the Virgin Island, who happened to be touring in Europe with Bambu Station in the same period. Together they recorded 6 songs in only 1 day.

With Asher E, Osagyefo recorded the other songs and 'Blaze Fire', the first album on Black Star label and the debut album of Osagyefo, was released in August 2007.

Black Star Foundation also arranged a lot of shows for Oagyefo, more than 10 shows in 1 month! Moccah, the urban lifestyle programm of The Box Music TV interviewed and filmed Osagyefo during his show in Paradiso, Amsterdam.

Black Star Foundation organised 2 more tours in Holland for Osagyefo: around his album release (August 2007) and for the concert of Alpha Blondy (November 2007), when Poor Man Friend and Osagyefo did the preshow.