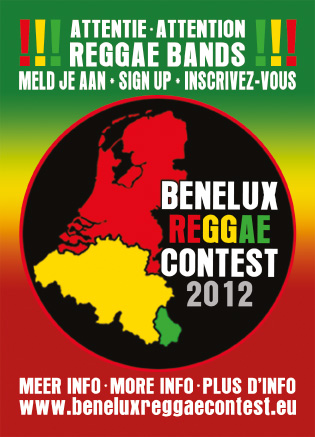 All live bands playing reggae, dub, original ska, rocksteady, ragga, dancehall, afro-reggae, samba-reggae and reggae-latino, who are residing in Belgium, The Netherlands or Luxemburg, can enter The Benelux Reggae Contest. No less than 36 bands entered the Benelux Reggae Contest 2012. From these 36 candidates a jury selected 10 bands to enter the second round (the semi-finals): Ace Black & The Jah Soldierz Band, Black Omega & The Team, Black Out Dub, Fullanny & The Rootscontrolahz, Heartwash, Racine Congo, Rudewalkin', Skarbone 14, Sunrockers and The Tuners.

The audience alongside a new jury, decided which three bands could go to the live finals on Friday, April 6 2012 at De Muziekgieterij in Maastricht (Holland): Fullanny & The Rootscontrolahz (NL), Skarbone 14 (BE) and Sunrockers (BE). The winnaar of both the professional jury as the audience was the Belgium roots reggae band Sunrockers!!

For this edition the winner will receive an even bigger prize package, like shows at different big festivals in Holland and Belgium.

Black Star Foundation will also support the winner of the Benelux Reggae Contest. In consult with the band there are several options: they might be booked to support a major reggae band, might get recording time in the studio, professional advice, support in posting a single on Dutch radio, etc.