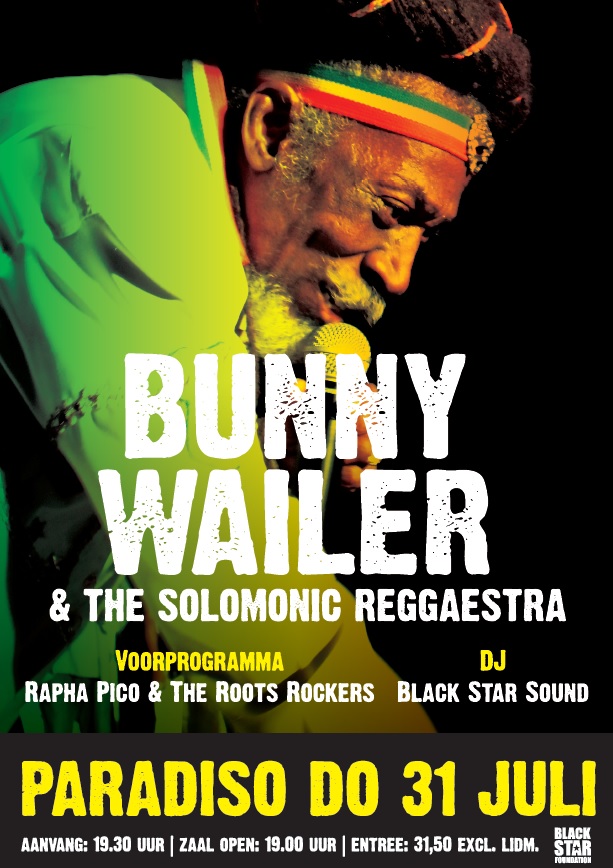 The Jamaican reggae legend Bunny Wailer is coming to Amsterdam with his band The Solomonic Reggaestra. On Thursday July 31st the band will perform in Paradiso. Bunny Wailer is 67 years old and the only living member of the original reggaeband The Wailers.

In 1963 Bob Marley, Peter Tosh and Bunny Wailer formed the group The Wailers. Bunny Wailer is often being called 'the forgotten Wailer', because according to many, he never got the credits he deserves. He is, together with Tosh and Marley, one of the most important founders of reggae music.

Bunny Wailer has performed in Amsterdam only a few times in his life. The concert will be his first club show in Holland. Bunny Wailer and his band The Solomonic Reggaestra are known for their very long and energetic performances of at least 2 or 3 hours.

The DJ's are Black Star Sound and Back-A-Wall Movement, they will spin their tunes to warm up for the bands, but also on the Afterparty in the Basement of Paradiso.

The organisation and promotion of the concert on Thursday 31st of July is in charge of the Dutch reggae foundation Black Star Foundation in cooperation with Paradiso (Amsterdam). Black Star Foundation already worked with the legend Bunny Wailer before, during the Made in Jamaica Festival in the Heineken Music Hall (2007).