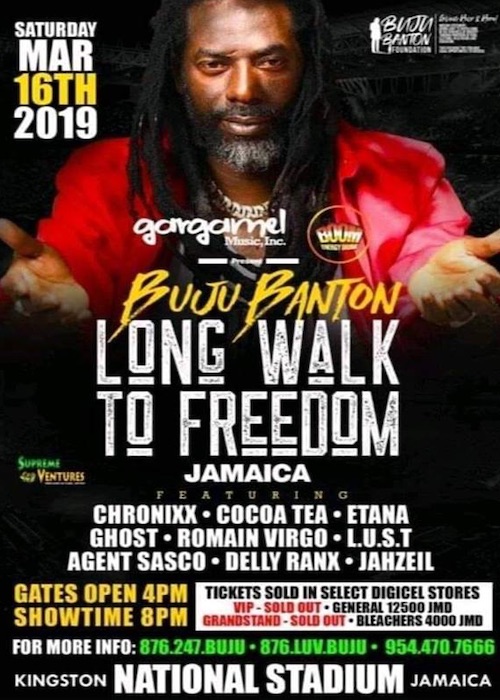 Black Star Foundation was present at the very first show of The Long Walk to Freedom Tour by Buju Banton, which took place at the National Stadium in Kingston (Jamaica) on Saturday 16 March 2019! The whole of Jamaica was exited. This show was gonna be special moment in Jamaican music history.


Our wristbands for the show in Kingston (Jamaica)!

Below a report of the concert, including lots of photos and videos (work in progress..)! First of all a few of the warm-up shows:

Etana had a spectacular show with dancers and all:

Time is passing and positive vibrations in the air.. Agent Sasco live on stage!

Then there is a change over for Buju's band... The whole program is passing by smooth and easy. Very special for a show in Jamaica!

Everybody is ready for Buju Banton, the people are mesmerized...

Too bad his zijn microphone didn't work at the 3rd song, but fortunately they fixed that technical problem soon. It was a great show of more than 90 minutes with lots of hit tunes, like 'Not an Easy Road', 'Destiny', 'Hills and Valleys', 'Til I'm Laid to Rest', 'Murderer', and many more!

We did notice that the artist did not lay any new tunes, after 9 years of prison..? However, from reliable sources I have been informed that there is already a lot of material of Buju, ready to be released for the next number of albums. We are looking forward to that!

The Queen of Reggae!

It was truly amazing to be present!