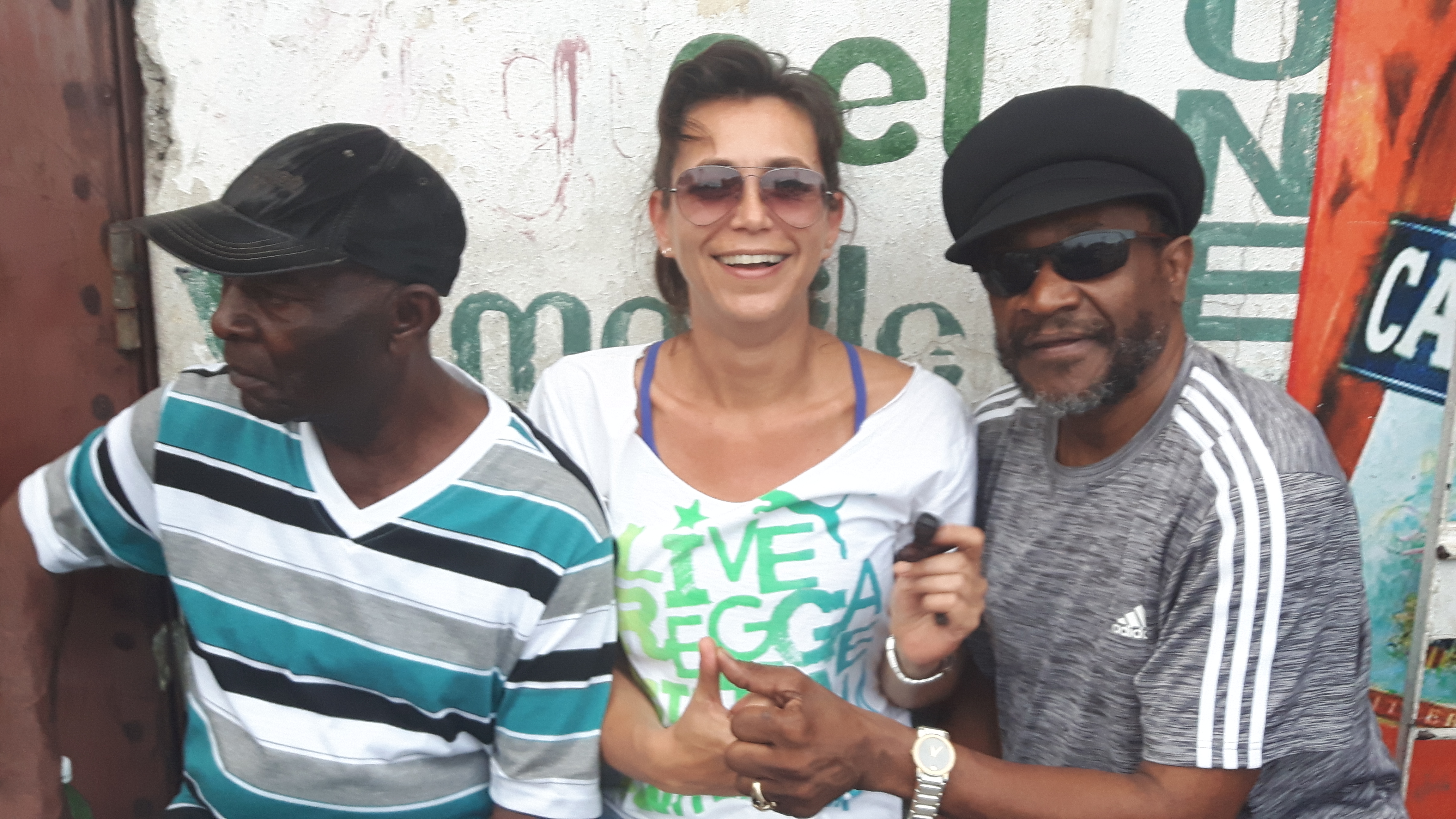 At least once a year Michelle (founder of Black Star Foundation) brings a visit to Jamaica and its capital Kingston. Over the years several Dutch artists have been traveling with her to this beautiful island for a musical tour. E.g. Brainpower came to Jamaica to record a video clip with the legendary Yellowman and Michelle accompanied a film crew in Kingston for a Dutch TV program with host Chris Zegers and singer/songwriter Tim Knol. Read more here...

Michelle
Michelle already went to Jamaica in the 90's. In 1993 she visited her brother Tim, who did research for his study in Kingston. In 1996 Michelle and her 2 brothers returned to the island for the marriage of good friend and Reggae artist Floyd Lloyd. They stayed a few weeks at Ska legend Justin Hinds and his family in Steertown, a small village located in St. Ann, the province in the North of Jamaica where Bob Marley was born and raised.

Michelle loves to travel and she visits Jamaica at least once a year. Through time she knows her way around the island, especially in Kingston town, the beating heart of the Jamaican music business. Michelle discovered beautiful spots, good studios and has many good and reliable local contacts in the music industry, so she can give her fellow travellers a safe and pleasant Jamaica experience, focussed on reggae music.

In 2008, Michelle and Den-Den went to Jamaica again. Among many other things, they have met Yellowman (see photo above) and recorded a single with him. Since 2009 Michelle and Den-Den visit the annual Rebel Salute Festival in Jamaica (mid-January) and they stay in the capital Kingston town for studio recordings for Black Star Sound and Black Star label. Den-Den also likes to visit various record stores in Jamaica to expand the record collection of Black Star Sound.

Lady K-Wida
January 2009 Lady K-Wida came along with Black Star crew Den-Den and Michelle. They visited Rebel Salute Festival (see photo below) and went to Kingston to record some songs. In Anchor Studios Black Star recorded two new riddims with Firehouse Crew, as well as the tune Bad Girls by K-Wida and Lady G. In Negril Yellowman invited K-Wida on stage during one of his shows and they performed One Man Woman together. Check the video here!

Brainpower
The cooperation began when Brainpower found out that Black Star Foundation was collaborating with Yellowman. Yellowman is one of the first DJ's (80-ties), an inspiration for rap and hiphop music in the US. Yellowman is a big hero for Brainpower, which eventually resulted in two combination tunes.


Brainpower at the house of Peter Tosh

January 2010 Black Star crew and Brainpower went to Jamaica. In Negril, Brainpower could perform with Yellowman! After a relaxing week at the beautiful beach of Negril, a visit to the home of Peter Tosh (see photo above), the Appleton Rum Estate and Rebel Salute Festival, the crew went to Kingston. Brainpower recorded a video clip and mini-documentary with Yellowman. Black Star Sound also mixed a riddim and recorded two dubplates with the legendary John Holt (see photo below).

Leah Rosier
In 2015, 2016 and 2018 the female reggae artist Leah Rosier from Amsterdam went to Jamaica with Black Star. In 2015, in a period of only 3 weeks, she did 6 performances (check the movie here!), recorded 4 new songs, shot material for 6 video clips (like Rude Boy) and was interviewed live on Bess FM, one of the largest national radio stations in Jamaica.


Leah Rosier during video shoot in Botanical Gardens in Kingston (2018)

DJ Dab
DJ Dab (Skank Around Sound, especially known from the Reggaebomb parties in Utrecht) had never been to Jamaica yet and asked Black Star for a musical tour (January 2016).


SBMG while recording a video clip in Jamaica

They also recorded a live riddim for the tune 'At At' at Anchor Recording Studios in Kingston with the original Firehouse Crew! End 2016 the album and video clip were released, including a documentaire of the whole trip: Part 1 / Part 2

Delidel Touch
Delidel Touch is a Cape Verdian reggae band from Rotterdam (Holland). Jorge (singer) and his brother Anibal (producer) are working on their long-awaited debuut album. So they are joining Black Star Foundation to Jamaica, to mix some of their recorded tracks for the album! The brothers were planning to come to Jamaica in February 2019, but unfortunately it never happened yet.

Erik Jan Harmens
Black Star Foundation and Dutch author/poet Erik Jan Harmens are planning to go to Jamaica to record a Dubpoetry album and release this as travel report/book with CD. The trip has been planned for 2022...

You?
Do you also want to go to Jamaica for e.g. recordings for your new album, video clip(s), or a cooperation with a Jamaican reggae artists, bands or sound engineers, and you don't have the right contacts yourself, please contact Michelle by e-mail or phone (+31646041420).